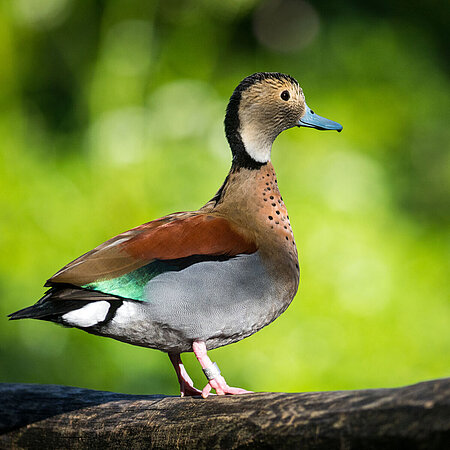 Unlike many species of ducks, where the male has both a nuptial plumage and a plainer eclipse plumage, which among other things serves for camouflage, ringed teals only have one plumage. On the other hand, the male ringed teal can wear his splendid, colourful plumage all year round. The plumage helps the male to attract females and is also used in defending his territory.

Whenever a ringed teal finds a partner, the two remain a couple for life. The female lays between 6 and 12 eggs in a tree cavity nest. After about a month the chicks will hatch and are raised by both parents together. As the chick’s layer of feather down is not waterproof, they rub against their parents’ plumage to obtain oil for waterproofing. In good conditions, a ringed teal couple can produce more than one group of offspring per breeding season.

Ringed teals can often be seen perched in a tree. The claws on their toes help to give them a better grip.