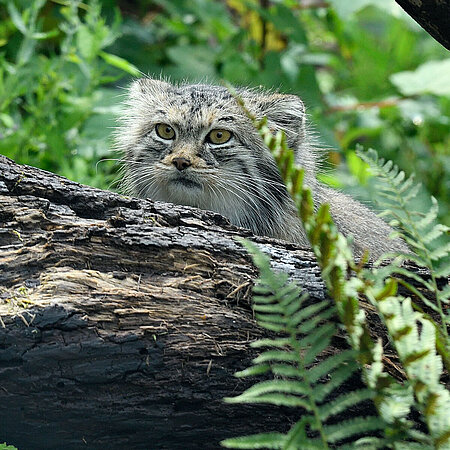 During the breeding season from December to March, if a male is successful in mating with a female he will follow her for three to four days after copulation to fend off other males while she is sexually receptive. He will then move on to mate with the next female. The female gives birth to a litter of three to six kittens in a den, which she raises alone.

The Pallas’ cat is native to the rocky steppes of Asia. It is extremely shy and mostly active at dusk and dawn. Its favourite food is pikas and marmots. The small wild cat is not only dependent on marmots for food, it also likes to stay in their burrows as it is unable to dig its own. The borrowed home under the rocks offers shelter and protection against its natural enemies such as birds of prey.

Unlike other felines, the Pallas’ cat’s pupils contract into tiny circles rather than vertical slits – just like ours do.