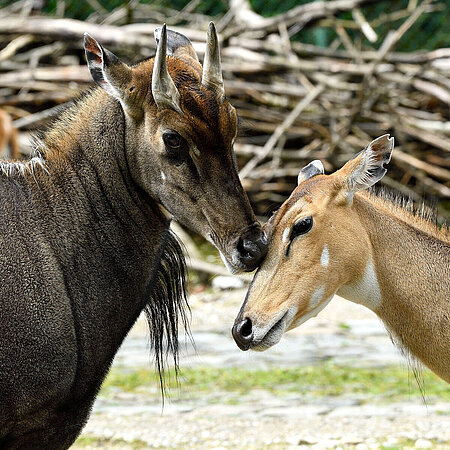 Male and female nilgai can easily be distinguished: only males have horns and are slightly larger than females. In addition, adult males have a bluish-grey coat, while that of the females is light brown with white patches on the head, neck and lower abdomen. Both sexes have the characteristic black and white “socks” around the ankles.

For most of the year, the nilgai herd live in small segregated groups of about 10 males or females, except during the mating season when the bulls join the cows for breeding. Breeding groups consist of one dominant male and several sexually mature females. Males tend to become aggressive during the rut and often fi ght among themselves. But the females can be just as quarrelsome. They, too, fight for social hierarchy.

Nilgai in Hindi means “blue cow”, which refers to the bluish-grey coat of the adult male.