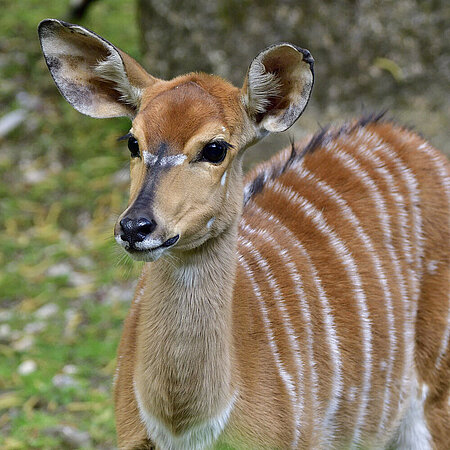 Despite their powerful horns, male nyalas seldom fi ght aggressively. Instead, they attempt to intimidate their opponent by posturing: bucks raise their white back mane to make themselves appear 40 % larger and slowly circle each other. Even when the bucks engage by lowering their heads and attacking with their yellow-tipped horns, the fighting is usually brief and not particularly fi erce.

Nyalas live in groups of up to 30 individuals, led by a dominant buck. The female members give birth about the same time and organise a nursery for all the offspring. A few of the mothers stay behind to look after the little ones, allowing the rest of the group to graze in peace. The mothers in the nursery also feed the young of the others. If a calf is thirsty it can be suckled by any female, not just its own mother.

The white stripes on the side of the male tend to fade as they get older.

Hellabrunn participates in the European Studbook