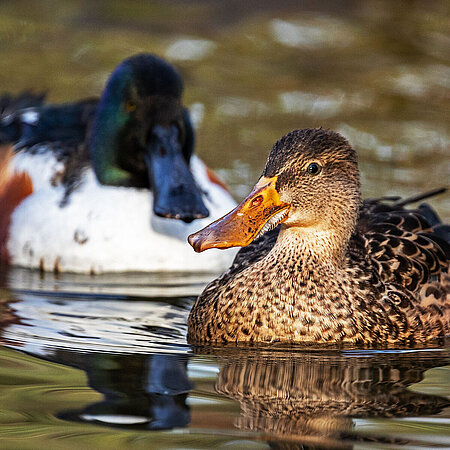 Common shovelers exhibit pronounced sexual dimorphism, meaning the male and female look very different. This difference is particularly evident in the breeding plumage of the males or drakes, which they gain in the cold season.  With its striking iridescent green head, it resembles that of the mallard. In summer, the drake is unremarkable with a mottled brown feather coating similar to that of the female.

The shoveler derives its name from its large, shovel-shaped bill, which it uses to strain food items from the water such as plankton, water fleas and fish eggs. They are using their bodies to swirl the mud at the bottom of the water and then deploy the comb-like edges of their bills to filter out the nutritious food particles on the water surface.

Male Northern shovelers can easily be recognized by their bright yellow eyes.