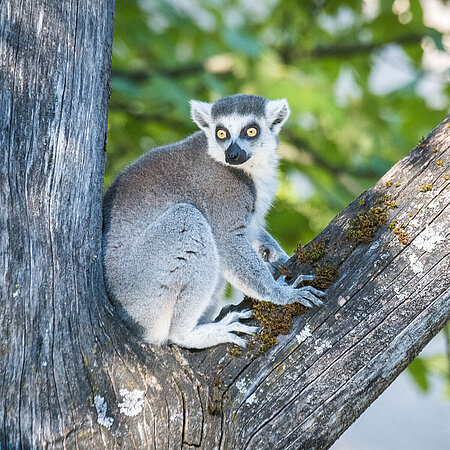 Like all lemurs, the ring-tailed species is endemic to the African island of Madagascar. However, they differ from most lemurs in that they are only active during the day. Ringtailed lemurs like to start the morning with a long sunbath – sitting with outstretched arms as they bask in the warming rays of the sun.

During the mating season, ring-tailed lemurs become restless within the group. The females fi ght for the best spot and their share of food, while the males battle for the right to mate. Males often settle disputes by engaging in a ritual called “stink fighting”, rubbing their tail in a smelly secretion from scent glands on the wrist and genitals and waving it above their head to outstink their opponent, until one backs off.

When travelling over ground, lemurs keep their black and white striped tails in the air to ensure everyone in the group stays together.