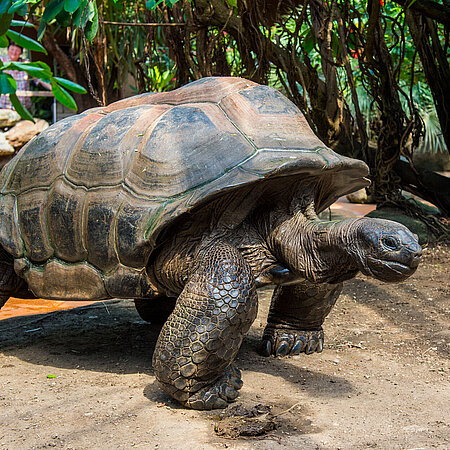 The Aldabra giant tortoise is one of the largest tortoises in the world and one of the longest living species on the planet. The carapace (domed shell) can grow up to 1.2 m long and gives it the appearance of an impregnable tank. It also indicates gender: the male’s shell is elongated, while females have a smaller, rounder shell. Aldabra giant tortoises easily live to over 100 years, although their actual age limit is believed to be an incredible 255 years.

Sexual maturity in Aldabra giant tortoises is determined by size rather than age. They usually begin to reproduce when they reach about half their full-grown size. The female digs a shallow nest in the ground and buries a clutch of 4 to 14 eggs. With no further parental involvement incubation is dependent on ground temperature. After about 3 to 6.5 months, the tiny, tennis ball-sized hatchlings emerge from roundish eggs.

The Aldabra giant tortoise has a fl at nose that allows it to drink water not only through the mouth, but also the nostrils.