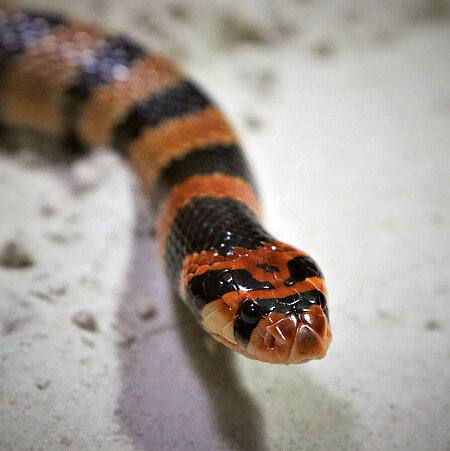 The colour of the snake depends on its origin. Cape coral snakes that live in Angola and Namibia in the north have a cream to greyish-brown colour with thick black bands along the length of the body, while those further south in South Africa have a coral red body with black bands. The bold colours advertise their dangerous nature to potential attackers, warning them to stay away. Many non-venomous snakes with similar colour patterns mimic the colour of the fearsome Coral snake to discourage predators.

Cape coral snakes spend the daytime underground in burrows or beneath stones to escape the heat. Their small head features an enlarged shield at the tip of the nose, which enables them to dig their own burrows. They belong to a group of shield-nosed cobras (Aspidelaps) native to southern Africa. The snakes slither out from their hiding place at night to hunt, preying mainly on lizards, small snakes and rodents.

When threatened, the Cape coral snake rears upwards and spreads its hood like a true cobra, but its hood is narrower.