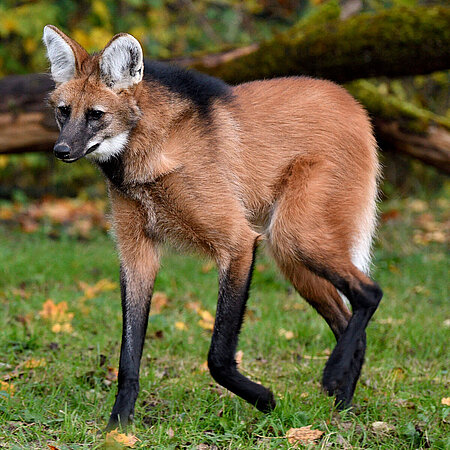 The maned wolf has incredibly long legs that allow it to see above the tall grasses of its native habitat. It walks by moving both legs on the same side of the body at the same time, which gives it a somewhat awkward gait. Rather than chase its prey, it slowly stalks it in the tall grasses, then swiftly pounces on its victim. The maned wolf also uses its enormous leap to catch birds and insects in fl ight.

Maned wolves form lifelong monogamous pairs, but the male and female live independently in the same home range except during the breeding season. Partners stay in contact with each other over long distances by releasing a loud roar-bark, which provides information on their location and can warn of intruders. The animals are reunited during the mating season; the male may help to care for the pups.

Maned wolves periodically return to renew the marking on their territory by depositing urine and faeces on the same spot.