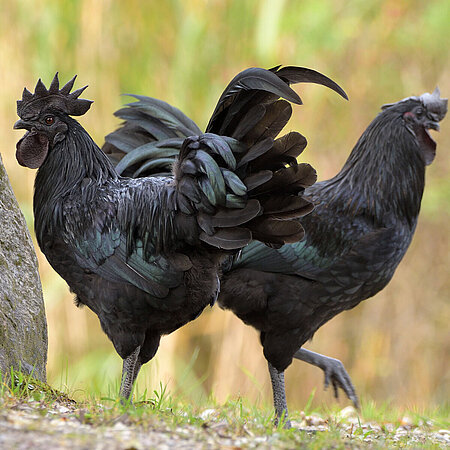 The chicken has existed in vilages on a small group of islands in Indonesia for centuries, but was first imported to Europe as recently as 1998. The breed was officially recognised in Germany in 2006. As it is rare in Europe and is descended from a small founder population, the rate of inbreeding is high. As a result, many eggs do not hatch to produce chicks, which makes breeding difficult.

Ayam Cemani means „chicken all-black“. This aptly named breed not only has an inky exterior, the organs, bones and meat of the chicken are all black as well. The unusual colouring is due to a genetic mutation called fibromelanosis, which causes excess pigmentation of the tissues. There are two exceptions: the bird’s blood is deep red and the eggs are cream coloured.

The pure black chicken is believed to possess mystical powers and is therefore used in religious rituals and traditional medicine.