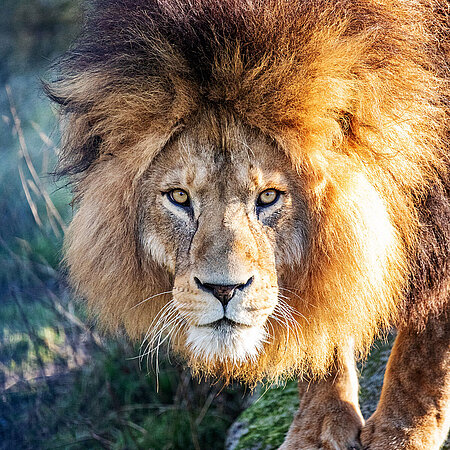 A juvenile male leaves its cubhood pride at the age of about two and a half years to join a bachelor group or strike out on its own. On reaching sexual maturity, it may challenge the dominant male of another pride, and if successful kill any existing cubs of its predecessor. Only then will the female become sexually receptive to the new leader. Dominant males are usually only able to hold their position for two to three years.

Male lions are largely responsible for defending the pride against intruders. The lionesses do most of the hunting, cooperatively. The big cat can survive days without food – a handy adaptation as only about one in every four hunts is successful. Lions conserve their energy in the African sun by sleeping or resting for up to 20 hours a day!

Lions were once also widespread across parts of Asia, but today the Asiatic lion is only found in the Gir Forest National Park in India.