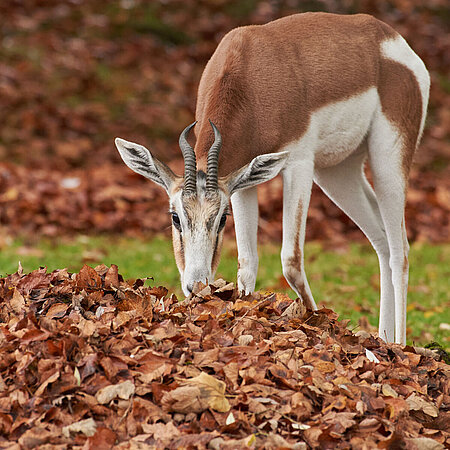 In late summer, the males engage in fight rituals over the right to mate with a female. The dominant male then proceeds with a courtship display that includes a “mating march” and a foreleg kick – the male’s front leg taps the female’s hind leg to fi nd out whether she is ready to mate. After a gestation period of about six months, the female gives birth. Within a few days, the newborn fawn is strong enough to join the herd.

Once widespread in the Sahara, the dama gazelle was on the brink of extinction by the 1980s. A reserve was set up by the Experimental Station of Arid Zones in Spain in an effort to save the species. The captive breeding programme was so successful that from a few individuals it was able to produce sufficient offspring to reintroduce a small number in Senegal. Similar reintroduction projects have been established in Morocco and Tunisia.

The rare dama gazelle is the largest and most colourful of all gazelle species.