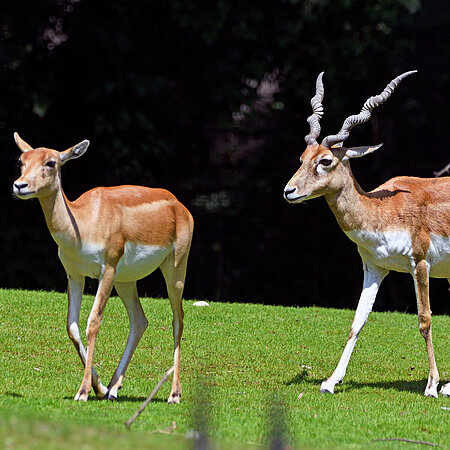 Blackbucks have adapted to the high temperatures of their habitat. They are mostly active in the morning and late afternoon, when it’s cooler. Activity slows down as the hot midday hours approach and they seek refuge in a shady spot. Blackbucks can go several days without water. To save water in times of need, the urine and faeces become very concentrated – the urine to such an extent it is almost dry.

One hundred years ago, the population of blackbuck on the Indian subcontinent numbered an estimated 4 million. However the population declined sharply in the 20th century due to excessive hunting and deforestation, increasingly shrinking their habitat. Today conservation projects have helped to increase the population back up to 30,000. The blackbuck was introduced in Texas and Argentina in the early 20th century for game hunting.

The dark brown colour of the male’s coat is hormonally dependent. Neutered males have the same colour as females.