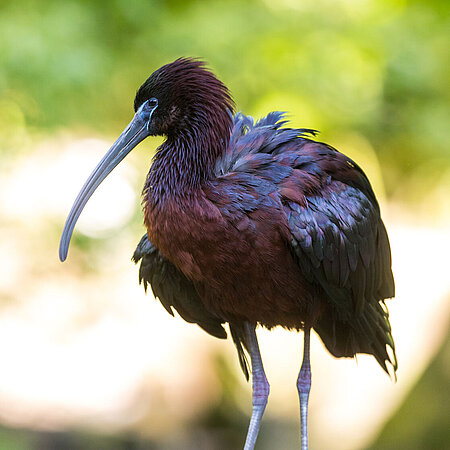 Glossy ibis usually form colonies of several thousand individuals during the breeding season. Even outside the breeding season they tend to socialise with other birds and go foraging together in small flocks of up to 30 individuals. They are often seen near other species of waterbirds that have previously dug the ground, thus making it easier for the glossy ibis to search for food.

Unlike the scarlet ibis, the glossy ibis is known for its dark brown appearance. Although not as brilliant as the bright red of its counterpart, its plumage acquires an impressive colouration during the breeding season: in sunlight, the plumage shimmers like metallic bronze, while the wings glisten with a strikingly beautiful green and purple iridescence. Apart from the colourful plumage, the glossy ibis also acquires red knee joints and a pale blue border around its face.

The glossy ibis is native to every continent, making it the most widespread species of ibis.