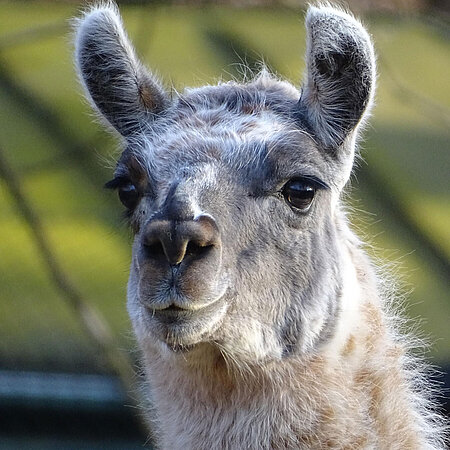 Llamas were domesticated by the Incas as pack animals. They also provided meat, leather and dried dung (for fuel). Today, the long-haired animal’s fine wool is highly sought-after for textile production worldwide. Apart from the estimated four million llamas in the Andes, the species has become a popular farm animal in many countries, including Germany.

As beasts of burden, llamas are indispensable to the An-dean people. Without them, the development of civilisations in the Andes would have been a much greater challenge. Llamas can easily carry a load of 50 kg for up to 30 km per day, depending on size and age. Their highland owners often pierce and decorate their ears with colourful yarn tassels in order to identify them when grazing in a herd.

Instead of incisors, they have a so-called chewing bar in the upper jaw, with which they crush their food as with a mortar and pestle.