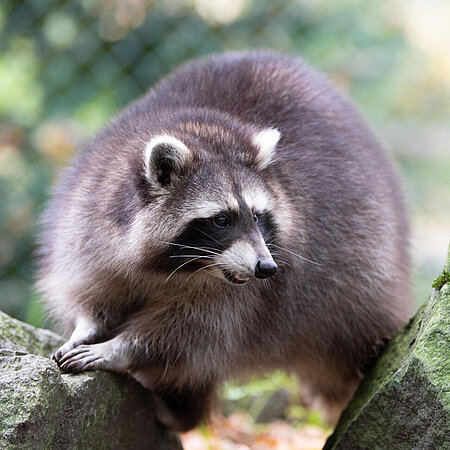 Due to its relatively poor vision, the raccoon relies on its senses of smell and touch when hunting and foraging for food. Its diet consists of plants and fruits as well as eggs, fish and small vertebrates. It also often rummages through garbage bins for food, thus encroaching on human habitats. It is therefore classified as a synanthropic species.

The raccoon is native to North America, but has long existed in Germany – raccoons were deliberately introduced to expand the range of local fauna; many also escaped from fur farms into the wild. The population grew quickly due to their excellent adaptability and the lack of predators such as pumas and jaguars found in their homeland. The raccoon is thus considered an invasive species, not only in Germany, but also in other parts of Europe and Japan. The problem with invasive species is their unpredictable impact on the native environments they invade. The raccoon, for example, competes with other predators, such as the fox, badger and polecat, for food. And as the raccoon lives in tree hollows, it displaces several species of birds from their nesting sites
and often plunders the eggs from their nests. To prevent the rampant spread of an invasive species and its suppression of the native species, its distribution must be controlled. The European Commission has therefore introduced strict regulations for the keeping and breeding of invasive species.

The raccoon uses its paws to rub or rinse its prey such as fish in water, giving the appearance that it is washing its food.

Invasive species not only include animals such as the raccoon, but also plants and mushrooms.