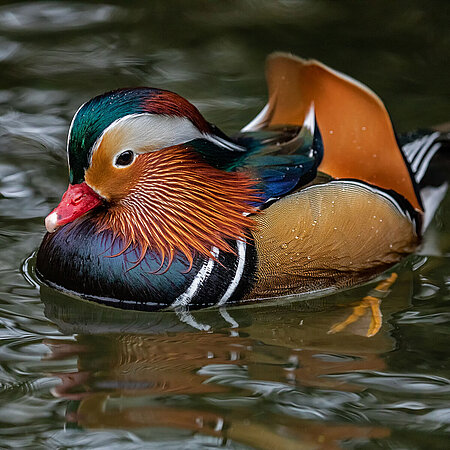 Originally from Asia, mandarin ducks were brought to Europe, mainly to Britain, by English travellers in the mid-18th century. The handsome ducks proved easy to keep as they tend to stay within a certain area and not stray from their habitat, provided there is enough food. However escaped and now wild mandarin ducks can now be seen in rural England, Germany and the Netherlands.

This fine looking bird is extremely tough. The cold European weather does not bother it. Mandarins are also not fussy when foraging for food. They eat everything from nuts, acorns and grains to small roots and aquatic plants as well as insects, fish lice and worms. They feed by dabbling, rarely submerging completely under water, but instead only placing their head under the surface to search for food. They also forage on land.

In Korea, mandarin ducks represent peace, fidelity, and plentiful offspring. A pair of mandarin duck carvings is often given as a wedding present.