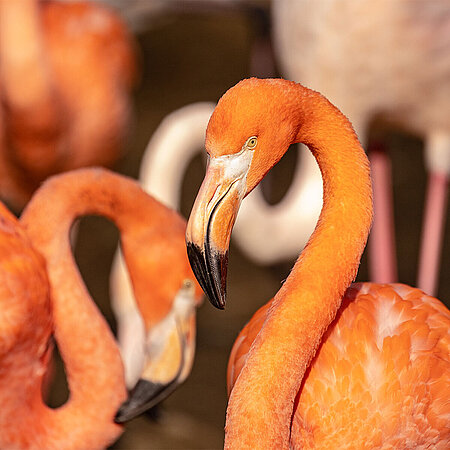 Flamingos are one of the oldest bird groups on planet Earth. They have existed in their current form for over 30 million years. Their adaptability allows them to inhabit not only temperate climates, but also colder regions such as mountain ranges 4,000 m above sea level. The greater flamingo (pink) and the American flamingo (red) are among the largest species of flamingo. American flamingos have more pigment deposited in their feathers than greater flamingos, hence the more intense red colouration

The wading bird’s diet comprises algae, small crustaceans and insect larvae. It feeds by using its highly specialised bill. Rapid action of the tongue pumps food- filled water into the mouth, which is filtered by hair-like structures called lamellae that line the flamingo’s large tongue and mandibles to ensure the food particles do not escape as the water is expelled. The trapped food is then guided down the throat by spines on the tongue and palate.

Flamingos get their bright colours by eating foods rich in carotenoid pigments such as algae and small crustaceans, which is deposited in the feathers to yield a striking plumage. If a flamingo’s consumption of algae and crustaceans is reduced, e.g. due to lack of food, its colour will fade.

Flamingos live in large colonies whose popu- lation can number up to tens of thousands. Females lay a single egg in a self-made cone-shaped mud nest. Both the female and male take turns to incubate the egg. After 27 to 31 days, the chick will hatch and is cared for by both parents. Both the mum and dad produce a type of milk in the upper digestive tract called crop milk, which is similar to the breast milk of mammals.

Flamingos live in large colonies where they forage together in regiments numbering several thousand.