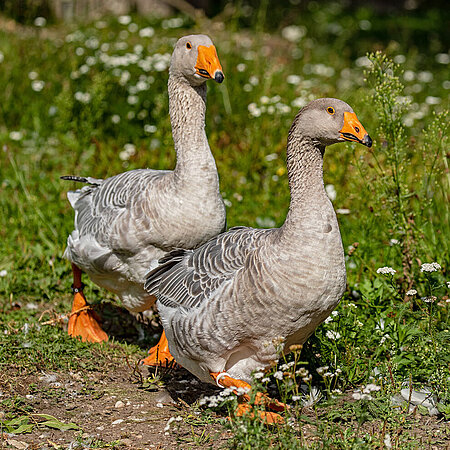 The Steinbacher fi ghting goose was created at the end of the 19th century by crossing a landrace goose and a Chinese goose. Named after the town of Steinbach in Thuringia, it was then bred for goose fi ghts, which were popular at the time. Today, the elegant goose breed is greatly admired for its beauty. Its typical black-tipped beak gives the Steinbacher fighting goose a grim facial expression worthy of its name.

Geese are originally native to the Arctic and Sub-Arctic and migrate annually to breeding grounds in the warmer south. There they were discovered by humans who began using them as farm animals. Various breeds evolved as a result of domestication, which have adapted to their new habitat, where they now stay all year round. However, there are still many wild geese that migrate from the Arctic to Central Europe each year, to spend the winter here.

Geese contribute to the diversity of fauna by dispersing seeds and nutrients through their droppings. Thus, they actively shape their habitat and the basis of their lives.