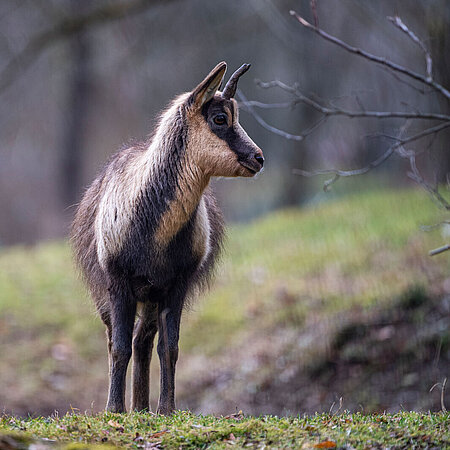 Male chamois are solitary animals that live separately from the females and their young. During the rut, the buck and doe attract each other by secretions from their scent glands behind the horns. Unlike other species of goat-antelope such as ibex that stage fi ght rituals without major injury, head-to-head combat among male chamois for the right to a female can sometimes be fatal.

Chamois are perfectly adapted to their habitat in the high mountains. They are remarkably sure-footed due to their padded soles and split hooves that provide optimal grip on steep or slippery slopes. Their relatively large lungs help them bound effortlessly up 1,000 m vertical metres of rocky mountainside in just a few minutes. During this feat their heart rate will reach up to 200 bpm.

Abruzzo chamois are only found in the high mountains of Abruzzo. It is a more colourful subspecies of the alpine chamois.